Browse: Home / CNIE was a hoot and a howl

CNIE was a hoot and a howl I’ve been scrambling this week to gather my forces coming out of a rather busy month, and in advance of a trip to NYC next week. So this will not even attempt to recap the experience of hosting CNIE here at TRU last week. Thankfully, Giulia has written up a fairly detailed overview. I’m grateful that so many wonderful people came to Kamloops, that everyone seemed to have good time, that the conference seemed to go very well, that our old dock did not collapse, and so much music got made.

I also had a blast delivering a session with DJ Dr. Jones laying down a live and improvised sonic layer, and was uncharacteristically pleased with how it turned out. Alas, it’s been a challenge to try to represent the barrage of sounds, images and references that we threw at the attendees. And time has been short. I’m about 80% done putting an online version together, and hope to publish it here next Monday.

In the meantime, I wanted to share a few minutes of audio that I think captured part of the week’s vibe. As I hoped, the weather was mostly favourable last week, and a significant number of us were able to spend time outside in the wonderful country that we have near here. After the conference wrapped, about thirty of us attended a “Hoot and Howl” at the McQueen Lake Environmental Education Centre for a relaxed BBQ, campfire singalong, etc… The real treat came after dark, when TRU’s Dean of Science Tom Dickinson joined us. Simply put, Tom is a treasure, with a wonderfully engaging manner and a wealth of knowledge. He took us on a nighttime hike in the woods, making sense of the cacophony of wildlife sounds around us. At the end he gathered us in a circle, called out to the owls, and to the wolves and coyotes. This short audio clip captures some of the magic — not least the sounds of educational technologists howling like wild dogs in the woods. 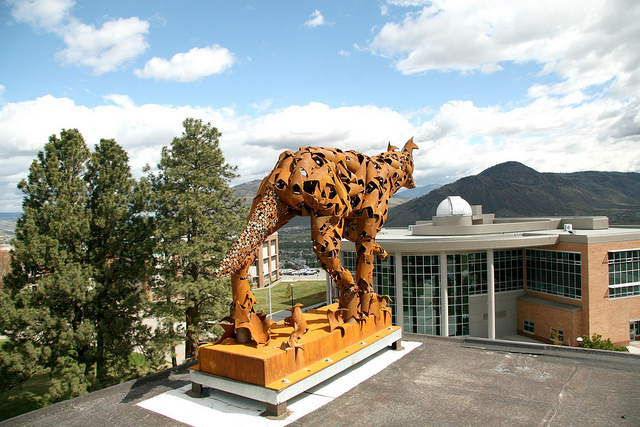